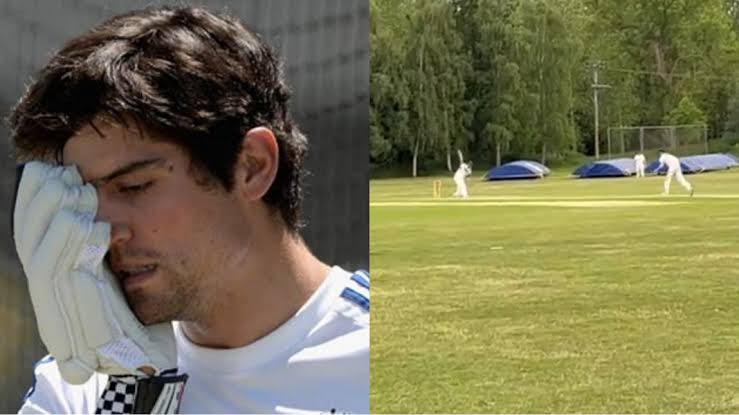 Former England cricketer captain Alastair Cook continues to play cricket in England county circuit and in local village cricket. He said goodbye to international cricket in 2018 during a series against India. During a match between Bedfordshire and Potton, Cook was clean bowled by 15 year old teenager Kyran Shackleton.

Playing for Bedfordshire Young Farmers CC , former English captain scored quick-fire 20 before his Stumps was shattered. Chasing a target of 155 in 12 overs Bedfordshire scored 128 /7 in their designated 12 overs. Shackleton picked up 4 wickets and gave away 37 runs in four overs. Potton won the match by 26 runs and entered into the Heritage Cup Semifinal.

“I was expecting to bowl at him, get hit about a bit and that would be it,” Kyran told BBC Three Counties Radio.
“Last night I sat up and watched the video of me bowling him over and over for about an hour. I just can’t get over it. He’d hit me for two boundaries in a row. You could see he was starting to move up the gears and then all of a sudden I just got him out. No-one really knew what to say. I just walked past him because I didn’t know what to do either.”

Former English captain smashed 12472 runs off 161 Test Matches in his international career, fifth highest Test run scorer of all time.
He surpassed Graham Gooch’s 20-year-old record of 8,900 runs in 2015 and became all time leading run scorer for England. Alastair Cook received knighthood for his services to the game from the Queen at Buckingham Palace in 2019.