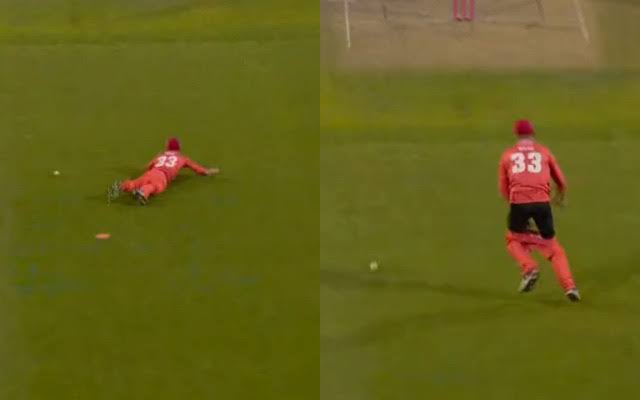 The Vitality T20 Blast 2022 witnessed a hilarious incident during Lancashire and Yorkshire match at Old Trafford on May 27. Lancashire skipy Dane Vilas attempted diving a catch but unfortunately he dropped the catch as well as his trousers.

It was a thriller match and ended with tie. Batting first Lancashire scored 183 in 20 overs. Philip Salt played a splendid innings and scored 59 from 44 deliveries. A quick fire vital knock 35 runs off 18 balls came from Tim David. Haris Rauf and Jordan Thompson picked up two wickets each for Yorkshire.

In reply, Tom Kohler-Cadmore’s 50-ball 67 and 72 runs from 48 deliveries from Harry Brook took Yorkshire very close to the match as they needed 13 runs from final over of the match. But they scored 12 runs and match was ended in a tie.

The funny incident happened when Yorkshire needed 6 runs from last two balls of the last over of the match. It was fifth ball of the 20th over when Shadab Khan attempted to smash the ball to the stadium but he didn’t connect properly and the ball balooned up to the mid-off fielder. Dane Vilas wanted to hold that catch but unfortunately wasn’t able to, and also his trousers came down.
“The catch goes down and he lost his trousers, Dane Vilas. It is all happening,” said one of the commentators.