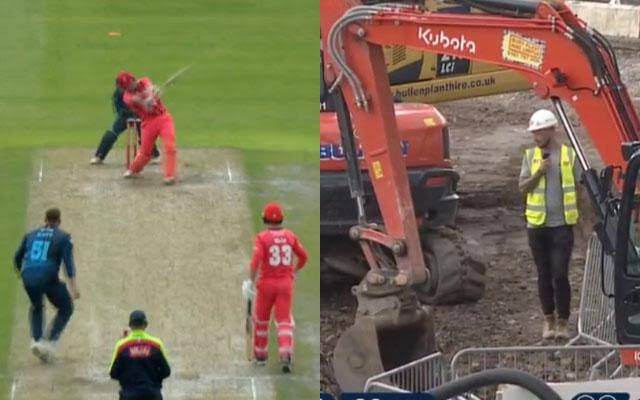 England explosive batter Liam Livingstone has showed fierce batting against Derbyshire in T20 Blast. He smashed 70 runs from 45 balls including five fours as many as sixes. Playing for Delhi Capitals in IPL 2022, he scored 437 runs with a strike rate of 182.08.

During the match of Lancashire and Derbyshire he again showed his ability to hit the ball out of the ground. He smacked left arm spinner over mid-wicket into a construction side, the commentators said,” How on earth do you find the in the middle of all that (construction)?.”

Few days ago Livingstone hit the ball over Old Trafford stadium against Yorkshire and he also hit 117m six, the biggest six of IPL in this year.

Liam Livingstone said “It was a good game of cricket. “The pitch was a bit interesting to start with, but it as the ball got a bit older it became a really good surface. We had a short side to defend when we were bowling and a short side to attack when we were batting. We would probably have liked to close it out a bit better, but all in all, it was a good win.”
“I love coming back here to play,” he added with a smile. It’s always nice to be able to affect games for Lancashire. It has been a day for the batters, but I guess you can look at our bowling and say we’ve done well to restrict them to that.”

However, Lancashire won the match by 17 runs.