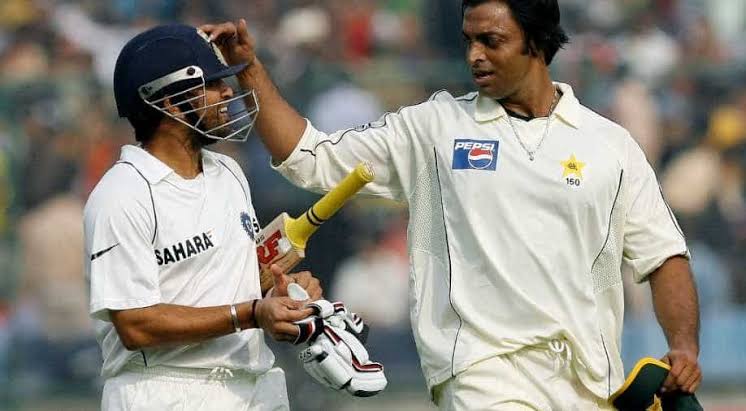 The rivalry between ‘God Of Cricket ‘ and ‘Rawalpindi Express’ is one of the most epic onfield battle in International Cricket. In a recent interview, Shoaib Akhtar recalled that he deliberately wanted to wound Sachin Tendulkar in a test match.

It was third test between India and Pakistan at Karachi in 2006. In a candid conversation with Sportskeeda Shoaib Akhtar, who was known for his speed and killer bouncer , admitted that he wanted to hit the helmet of Batting Maestro Sachin Tendulkar during the test.

“I’m revealing this for the first time. I intentionally wanted to hit Sachin in that Test match. I was determined that I had to wound Sachin in that Test at any cost. Inzamam kept saying that bowl in front of the wickets, but I wanted to hit Sachin. So, I hit him on his helmet, and I felt he was done. But when I watched the video, I saw Sachin had managed to save his head,” he said.
“I tried to injure him again. On the otherside, Indian batting was facing the music in the shape of Asif. I had rarely seen anyone bowl as well as Asif had bowled on that particular day,” he added.

Sachin Tendulkar who said goodbye to international cricket in 2013 but his craze still remains specially ‘Sachinnnn…. Sachinnnn’ chant. His surreal knock against fiery Pak pace attack kicked them out of 2003 world cup. He transformed lethal bowling attack of Pakistan to a punching bag. Tendulkar became first batsman in international to score double hundred in ODI and only batsman to hit hundred international centuries.

See also  "I rate him highly because he is a dangerous player" : Sachin Tendulkar names "under rated" IPL batter | Watch

“Ganguly would have been sacked from captaincy if…” : Harbhajan Singh
Rishabh Pant makes big statement after being named India Captain