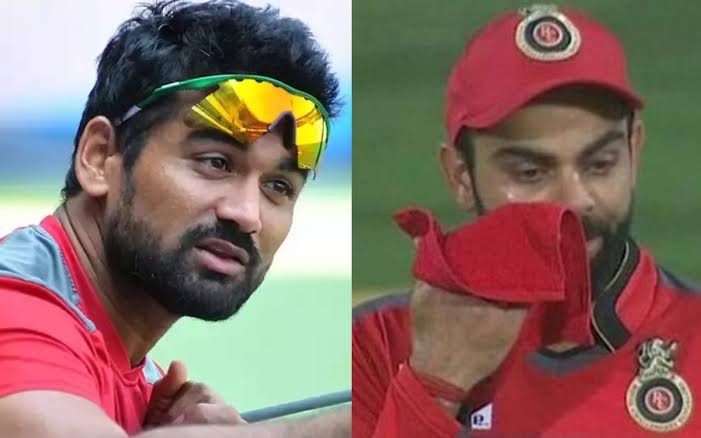 Former India captain Virat Kohli is widely regarded as one of the finest batter in modern cricket. He has scored 70 international centuries. Virat represented U15 and U17 for Delhi. His Delhi teammate Pradeep Sangwan revealed a prank on Virat Kohli turned out to be as he started crying and didn’t even sleep that night.

The incident happened during his U17 playing days for Delhi. Virat didn’t score many runs in 2-3 games but his overall season was good. On that Delhi coach planned a prank on Virat.
In a chat with News 24, Kohli’s teammate during his teenage days, Pradeep Sangwan revealed ” “We were playing in a U17 match in Punjab. He (Kohli) hadn’t been scoring big in the past 2-3 innings. We had a coach named Ajit Chaudhary who used to call him ‘Cheeku’. Virat was the main player of our team, and Ajit sir funnily suggested, ‘let’s tell him he will not play in the next match. We all joined in on the prank,”

“In the team meeting, sir didn’t announce Virat’s name. He went to his room and started crying! He phone-called sir and said I’ve scored a 200 and a 250.. he had scored big in that season, to be honest. It’s just that he didn’t get enough runs in the past 2 to 3 innings. He got so emotional he even phone-called Rajkumar sir (Virat’s childhood coach),” he added.

After the incident Virat came to Sangwan and asked him the reason behind his exclusion from team. Sangwan told him it was just a prank and he wasn’t actually dropped from the team.

“Then, he came to me and asked, ‘Tell me Sangwan, what’s wrong? I scored so many runs this season. I told him, ‘Yes yes, that’s very wrong!’. He wasn’t able to sleep all night as well. He said, “No, I don’t want to sleep. What’s the point of sleeping when I’m not playing?’ Then, I told him that he was playing. It was all a prank!” said Sangwan.

Recently Virat Kohli was seen to enjoy his much needed break with wife Anushka Sharma. Actually he was rested by BCCI for the five match T20 series against South Africa. Team India will play their first match today at Arun Jaitley Stadium , Delhi.