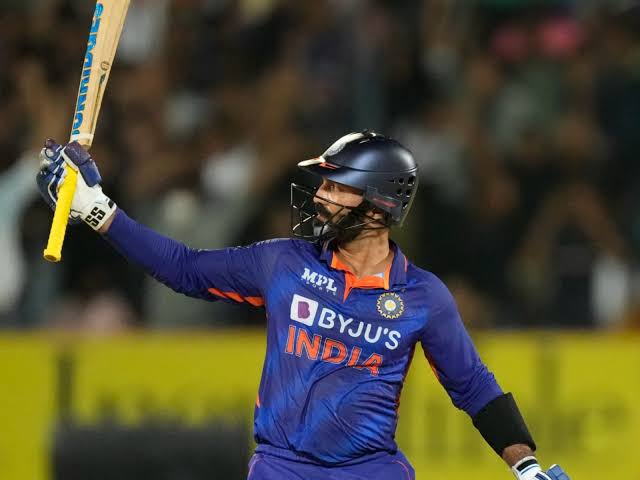 Dinesh Karthik smashed his maiden fifty in T20I cricket. He became oldest Indian batter to hit his first international half century in the shortest format of the game, which came in his 36th T20I appearance. Meanwhile, Karthik slammed magnificent 55 from 27 balls against South Africa yesterday.

Indian wicket keeper batter blown away African pace attack in the 4th T20I of the ongoing five match series. He hit two sixes and nine boundaries with a strike rate of over 200.

Hardik Pandya and Dinesh Karthik stitched match winning partnership of 65 runs. Team India scored 113 runs in the last 10 overs of the innings as Pandya and Karthik went into beast mode in the end overs in Rajkot.

I think DK is thinking a little better : Dinesh Karthik

Dinesh Karthik won Player Of The Match award. “Just feels good. I am feeling very secure in this setup. In the last game things didn’t go according to plan, but I went and expressed myself today. I think DK is thinking a little better. He is able to assess situations better and that comes with practice. Credit to my coach” said Karthik at the Post Match Presentation.

“Bangalore is a home ground for me. I haven’t played with RCB, but have played a lot over there. It is good to see a bilateral series going down to the final match.The dressing room is a calm place right now. It is important to learn to embrace pressure. It feels secure and fuzzy. That clarity and the environment helped” he added.