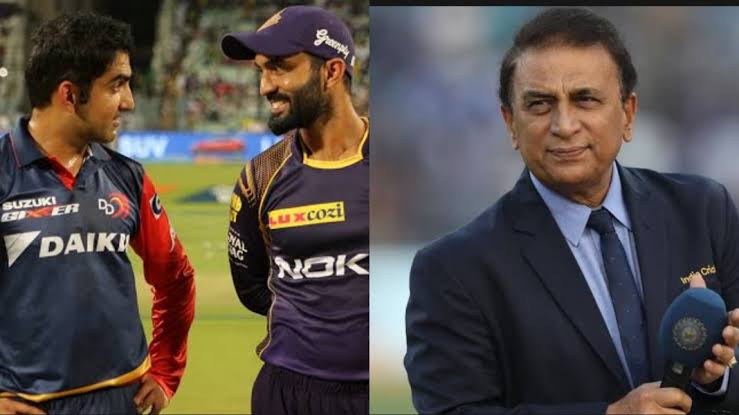 Both were opening for India but recently one didn’t agree with another’s comments. Sunil Gavaskar indirectly slams Gautam Gambhir for his comments on Dinesh Karthik about the T20WC chances. Meanwhile, ahead of fourth T20I match vs South Africa Gambhir had said “ “If he doesn’t have a place in the playing XI, there’s no point giving him a place in the squad” . But Gavaskar feels that Karthik is the “player India wants”.

Former Indian cricketer Sunil Gavaskar was surprised on how anyone could tell Karthik shouldn’t play, saying that players should be chosen on the basis of their form and not reputations.

“I know people are talking about how can you include him in the team when he’s not going to play. How do you see he’s not going to be able to play? He could be the guy you want. You look at the form and not reputations, names and then you pick the guy,” said Gavaskar on Star Sports.

The 37 year old Dinesh Karthik made comeback to international cricket after almost three years. His magnificent performance for RCB at the lower down order helped him to wear blue jersey again. He scored 330 runs with huge strike rate of 183.33 at a average of 55 in IPL 2022.

“He (Karthik) doesn’t get too many opportunities, bats at number six and seven. You can’t expect him to get 50 regularly. He’ll get you a good 40 in 20 deliveries and that’s what he has been doing consistently. He did the exactly the same thing again and that is the reason why he’s very much in contention for a place in the World Cup squad. The way he got runs today, India were down and out. Don’t look at the man’s age, look at the performances,” said Gavaskar.

However, Team India levelled the series after they beat South Africa by 82 runs in the fourth T20 on Friday. Dinesh Karthik played magnificent knock of 55 from 27 deliveries. Rishabh Pant led team will play last T20I match of the ongoing series on Sunday at Chinnaswamy Stadium, Bengaluru.