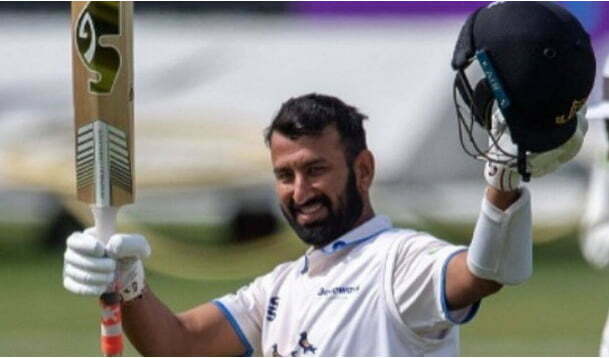 Indian batter Cheteshwar Pujara said that one of his goals is to win the ICC Test Championship for his country. India’s Test veteran held a Q&A session with his fans on Twitter, which saw his fans asking many questions about his career and life.

On being asked by a user about goals for the rest of his career, Pujara answered,
“I like being in present and don’t set too many goals for the future but winning the WTC title is one.”
Coming to the World Test Championship 2021-23, India is currently placed at number four with a win percentage of 52.08. Team India has won six Test matches, lost four, and drawn two. It will have to do extremely well and go for a win in its next fixtures to take either of the top two spots, occupied by South Africa and Australia respectively. India had reached the final of the World Test Championships 2019-21, in which they lost to New Zealand at Rose Bowl, Southampton by eight wickets in June last year.

He is a one-format batter for India in recent years, having featured most prominently in whites. In 96 Test matches, he has scored 6,792 runs for his nation at an average of 43.81. 18 centuries and 33 half-centuries have come out of his bat, with 206* being his best score. Due to this run of form, he was dropped from the Test squad for the series against Sri Lanka earlier this year but made his return to the side for the fifth and final Test against England in July due to his stupendous form for Sussex during his county stint. In 13 innings across eight games in the county championship, he has scored 1,094 runs at an average of 109.40.
His best individual score is 231. Five hundred-plus scores have come out of his bat in the championship. He sits at the second spot in batting charts here.

In the ongoing World Test Championship 2021-23, Pujara has represented India in 10 matches.
Throughout these matches, the veteran has not been at his best, having scored 525 runs in 20 innings at a sub-par average of 27.63. His individual best performance in these matches is 91. Four fifties have come out of his bat in this period.

Team India arrives for practice in Dubai ahead of Asia Cup 2022
Hardik Pandya 2.0 : The Rise of Pandya