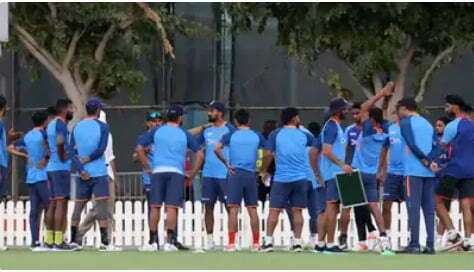 Team India arrived in Dubai for their practice session ahead of Asia Cup 2022, which will start on August 27.
Head coach VVS Laxman, Hardik Pandya, Suryakumar Yadav, Dinesh Karthik, Ravichandran Ashwin and
star batter Virat Kohli were among some of the players who were captured arriving at practice.
The Asian Cricket Council’s marquee event returns after a four-year interval with the 2022 edition of the Men’s Asia Cup. Being played in the T20 format, across two venues. Dubai International Cricket Stadium will host nine games including the final, while Sharjah Cricket Stadium will host four games, starting from August 27 through September 11. Defending champions India are also the most successful team, having won the trophy seven times. While the last edition of the tournament was held in an ODI format, this edition will feature the T20 format.