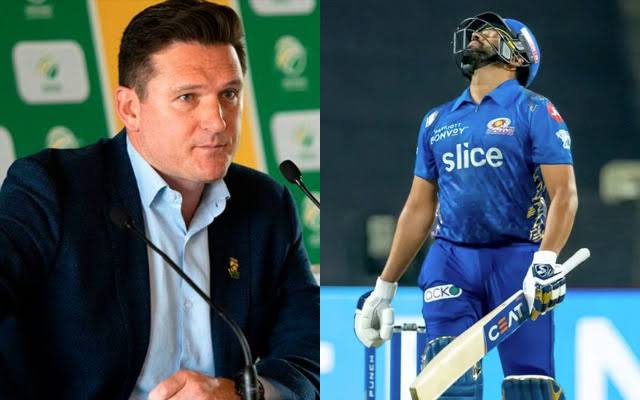 Mumbai Indians, a five-time title winner of IPL with its skipper Rohit Sharma is yet to record its first win in IPL 2022. They lost all five matches in a row. Rohit Sharma is still lacking in contribution towards batting in the current series. Former South African Captain Graeme Smith feels that Rohit Sharma’s low performance is due to the Mental Strain of leading India in all three formats.

“This is the first tournament he is captaining MI since becoming India’s white-ball captain. Does that mental strain take a toll on the IPL? It’s something to consider,” Smith said as quoted in ‘Cricket.com’.

Rohit was appointed India’s full-time Test captain in February with his first assignment being the series against Sri Lanka in March. In the IPL 2022, Rohit Sharma is struggling to score runs for the Indian team at the top order. Smith feels that one of the reasons may be leading across the formats gives him mental strain in IPL’s current series.

“Rohit is the energy at the top of the order. Gets them off to a start, and sets up the game that allows everyone else to play. When he is scoring runs MI are going to win a lot of the time.”

Rohit has just scored 108 runs from five matches at an average of 21.60 and a strike rate of 133.33. In the IPL 2022, Rohit failed to find the consistency that he is known for while playing for India. Smith said remaining touch will make Mumbai Indians much easier.

“He’s just such a key player. If you look at the line-up, Rohit, an outstanding player, hasn’t found form. You’ve got Ishan Kishan, and Suryakumar Yadav injured for a couple of games. He has now come in and is looking good and then Pollard as the power finisher. You’ve got Brevis there but he’s a young man. That’s a very strong batting line-up,” he added.

‘RCB Bold Diaries’ – Warne lived the way he wanted to live says Virat
MI vs LSG: Everyone Is Trying Their Best To Win – Suryakumar Yadav