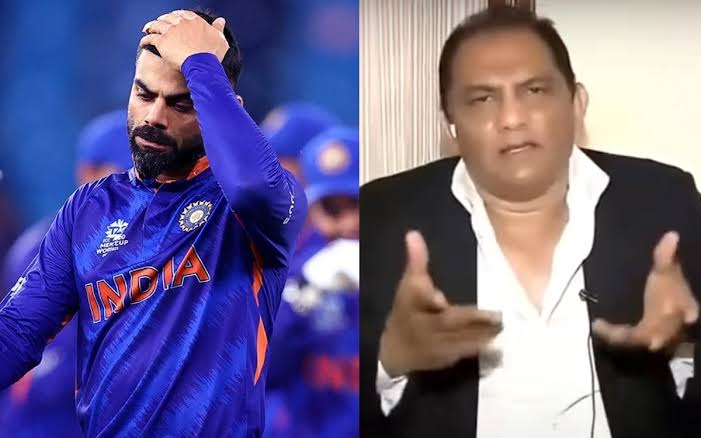 Former Indian captain Virat Kohli is going through worst phase in his career. In the match between SRH and RCB Virat Kohli was again dismissed without scoring a run. This is his second consecutive golden duck. Earlier in the previous match Virat scored zero against LSG.

Virat Kohli left RCB’s captaincy before start of the IPL. His disappointing performance in every game in IPL 2022 hurt cricket fans. In International cricket, he has not scored a century from last two and half years. Some cricket experts suggests him a break from cricket as he has played so much cricket from last 6-7 years.

Former Indian captain Mohammad Azharuddin shares his opinion about Virat’s failure on Crictracker show. He feels Virat should take 2-3 months rest as he played too much cricket. He also said Virat has abilities but because of playing continuous matches in IPL his footwork has become lazy.

“Basically, I feel he has played too much cricket. I know a lot of people are saying that he has had much rest between the international matches. But if you play in IPL, day-in, and day-after, so I think his footwork has become quite lazy. Maybe as a player or person watching him play, I feel he should take a break for 2-3 matches and rejuvenate himself,” Azharuddin said to Crictracker.

“When you are not scoring well, you always have the pressure to score runs in the next match and so on. But, when you take the break of 2-3 matches, your mind is fresh and you sit and enjoy with the team. Virat is too good a player, and no one can doubt his abilities. But, his foot never went forward and if you stay at the crease when the ball is swinging, you are found wanting,”  he further added.