Krunal Pandya kissed Kieron Pollard on his head for taking his wicket in the last over of the match between MI and LSG. 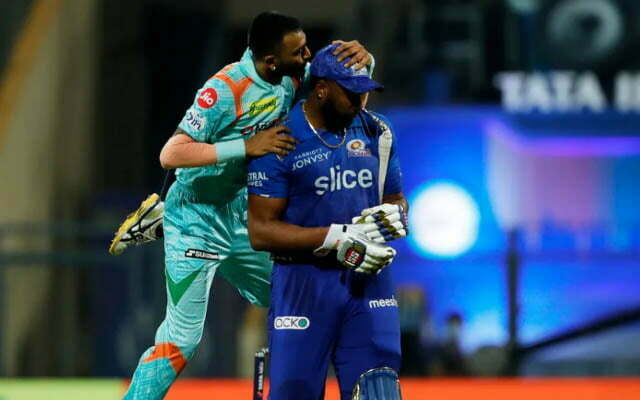 In IPL 2022 the match between Mumbai Indians and Lucknow Super Giants sighted a surprising scene. Krunal Pandya was trying to shake hands with Kieron Pollard, but Kieron dint respond. Krunal Pandya jumped at Kieron Pollard to kiss his head but he kept walking without reaction.

Kieron Pollard and Krunal Pandya are awesome companions in MI until 2021. In the current season, LSG took Krunal Pandiya for their team in the mega auction and played as rivals.

MI lost their consecutive matches and has no hope for playoffs in the current season IPL 2022. Pollard wasn’t too happy about his dismissal. With Pollard’s dismissal, Mumbai had slowed down scoring runs while chasing a target of 169 runs and ended up scoring only 131/6.

As soon as the incident happened, it was on Twitter, some of them weren’t impressed with Pandya’s outrageous behavior. A video is now going viral on social media.

Pandya while addressing the individual contest between the two during the post-match presentation ceremony said,

“I was so thankful that I got his (Pollard) wicket otherwise he would have eaten my brain throughout my life because he got me out and now that it’s 1-1 at least he will speak less. Honesty is important in the team and these guys (coaching staff) are doing pretty well and ensuring everyone is getting better. For me process is important and we want to accept our mistakes and learn from it”.

See also  Will Arjun Tendulkar make his IPL debut today ? Fans urged to give him a chance

Pandya is also credited their team skipper KL Rahul for leading them in a better way.

“It was a terrific knock, leading from the front and got us to a respectable total, so all credit goes to him (KL Rahul). I had no idea about how the wicket was going. When we batted, KL was mentioning that the wicket was stopping a bit so we tried to bowl slower and ball that hard length for the new batters,” he added.