Delhi Capitals skipper Rishabh Pant was dismissed by Shreyas Gopal after going for consecutive sixes on May 5 against Sunrisers Hyderabad. 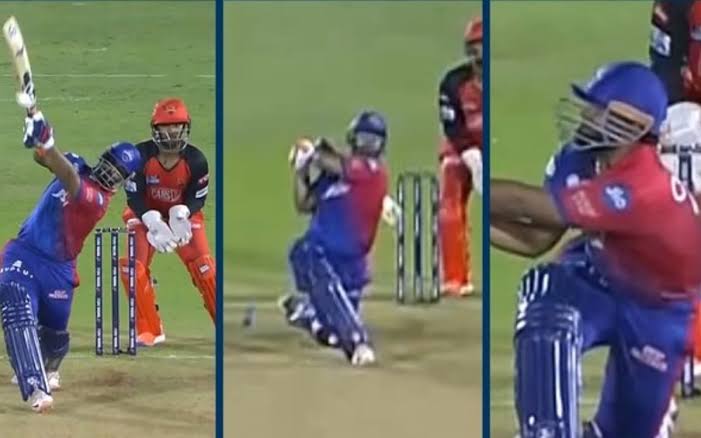 Delhi Capitals skipper Rishabh Pant was dismissed by Shreyas Gopal after going for consecutive sixes on May 5, Thursday’s game against Sunrisers Hyderabad.

Sunrisers Hyderabad captain Kane Williamson won the toss & opted to field first against Delhi Capitals in the 50th match of the IPL 2022.  DC openers gave a poor start as Mandeep has gone out for a duck in the first over. However, David Warner and Mitchell Marsh tried to steady the ship. Meanwhile, Mitchell Marsh got out for 10 runs with a total of 37/2 putting DC in trouble.

Rishabh on the field with Shreyas Gopal bowling:

The DC skipper Rishabh Pant came to bat and struggled in the starting of his innings and scored just 4 runs in the first 11 balls. Shreyas Gopal, who is making his debut for SRH in the game, came for bowling. Shreyas just gave one run in his first over. Rishabh Pant shifted the gear and decided to attack Shreyas Gopal’s second over.  Pant smashed three consecutive sixes followed by a boundary and lost his wicket in the same over. Rishabh got out scoring 26 runs from 16 balls. Shreyas Gopal looks delighted after taking Pant’s wicket with his widish full toss.

When the score was 87/3 Rovman Powell joins David Warner. Both overseas players gave a fantastic knock for DC to score a big total of 207/3. Warner scored 92 of 58 balls with 12 fours and 3 sixes. Rovman Powell with 67 runs in 37 balls with 3 boundaries and 6 sixes.

While chasing a big target from DC, SRH openers failed to give a good start. And SRH lost their wicket in consecutive intervals ending up 186/8 in their 20overs. And SRH lost to DC by 21 runs.

Delhi capitals now shifted to the fifth position in the points table with 5 winning matches out of 10.