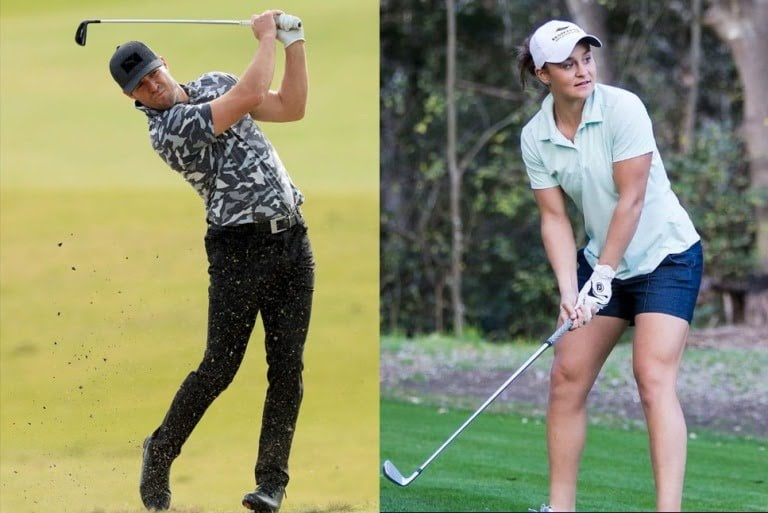 Former South African cricketer AB de Villiers has returned back to a new path of playing Golf with Ashleigh Barty. They will be representing Rest of the World team against team USA for a Golf event in Jersey City from June 30 to July 1. It is seen swimming legend Michael Phelps and boxing great Oscar de la Hoya are the other stars who will be seen playing for Team USA in the event. Team USA will be captained by A Freddie Couples and Rest of the World team by ‘The Big Tasy’ Ernie Els with 14 other sporting stars playing in the Golf event.

25 years old Ashleigh Barty’s was number one player in women tennis announced her retirement from tennis in March which was shocking for tennis world. Cricketer AB de Villiers, who retired from all formats of international cricket in 2018 and from the game entirely last year, called her retirement as a “weird one to explain.”

Ash Barty world no 1 and three-time Grand Slam winner stepped down from Tennis leaving it as short career and taking time out to play cricket  and try her hand at golf as well. De Villiers first met avid cricket fan Barty when she was playing in Australia’s Big Bash League in 2019 and are teaming up for Gold event at the end of June.

AB de Villiers shared his thoughts about Barty’s retirement to AFP in a phone interview.

“It is a weird one to explain,” said AB de Villiers.

“I think the best answer is that every person has their own way of manoeuvring through their career, some as long as possible.

“The whole world respects her decision. I would like to think stepping away can be a relief but it is an incredible age to retire at.”

When asked about his decision on retirement, who averaged over 50 in both Test and one-day international formats said,

“I am feeling quite happy I made the right decision even if I miss the game and will be forever grateful to the sport.

“But similar to Ash there is a peace of mind where I am at”.

“There are no regrets. Yes, I made mistakes but no regrets”.

AB de Villiers was also known as ‘Mr 360’ for his stroke play and ‘Superman’ for his astonishing fielding. He mentions that he was fortunate not to have many bad runs with the bat during his career.

De Villiers sympathises with his close friend, Indian superstar Virat Kohli, who he played with at IPL for Royal Challengers Bangalore. Virat has been going through a rough patch in recent times and failed to score big.

“As a batsman you are only one or two bad knocks away from bad form,” said AB de Villiers.

“If it keeps coming at you it is difficult to bounce back from it.”

De Villiers says he has not been in touch with Kohli, but says the struggle becomes large.

“I cannot put a percentage to it but it is the mind and power of the mind which is the main battle,” he said.

“You do not become a bad player overnight. Virat would know it and I know it. I think it’s the way you think and set your mind.

“You need a clear mind and fresh energy whenever you play and then you can find a way out of a hole.”

“Test cricket is my number one format,” he said.

“I think most players feel that way. There is nothing more rewarding than standing out there for five days with your team.

“It is the ultimate challenge. I do not know why anyone would say they do not want that challenge in the hardest of formats”

“I will stop watching cricket if Test cricket were to be no more” concluded AB de Villers.