Pollard admitted that he hasn’t been able to finish the games : Jayawardene 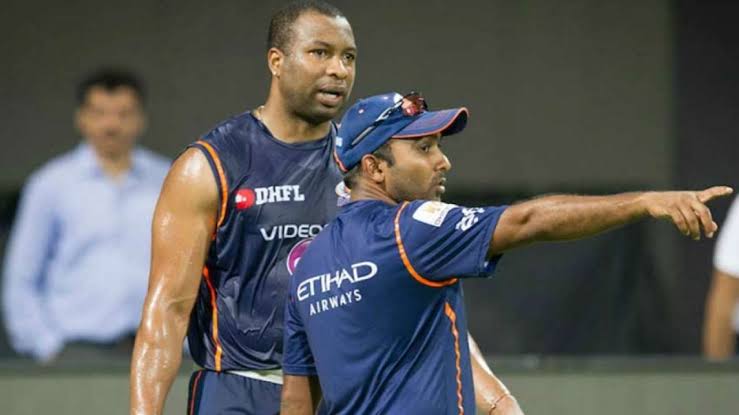 Mumbai Indians’ explosive batsman Kireon Pollard didn’t show his finishing style in the ongoing IPL tournament. His performance in the last five overs has badly affected the franchise. Since 2010 he has been part of Mumbai Indians. His explosive batting performance specially after 15 overs helped MI to win five IPL title. He has scored 3393 runs with huge strike rate off 148.43 but this year he scored only 125 runs from 9 matches.

During media interaction, MI coach Jayawardene said “Pollard admitted that he hasn’t been able to finish the games”. Former Sri Lankan captain further added that Kireon Pollard didn’t get support from other hand and it’s tough for one person as it’s a team game.

“Kieron Pollard has been honest as well, expressing himself that he hasn’t been able to finish games. But at the same time, when you review properly, those were situations where it’s tough for one person to do the bulk of the work. It’s a team game.“

“He needs a little bit of support as well, which he lacked in some of the other games. We would love to see Polly in his usual rhythm and go and execute.He looked good in the first 3-4 games and was hitting well, but never had the support from the rest to try and finish games off. You need to take the whole tournament into perspective and analyze rather than picking a few games. The numbers and the consistency are not there, but that’s something that not just Pollard but we as a group have to improve on.”

Mumbai Indians head coach also spoke about Ishan Kishan’s natural game. Indian wicket keeper batsman was picked by the franchise for a whooping price of 15.25 cr at the IPL mega auction. He said team’s circumstances forced him to bat differently. The talented youngster began his IPL campaign with two back to back half centuries but after this his performance suddenly fall and has managed to score 225 runs from 9 matches.

“The conversations I have had with Ishan Kishan this year were about his natural game and playing with intent. He is known for that and his positive approach. He had that intent during the first few games.The team’s circumstances in some of the other games prompted him to bat differently. He did get into a bit of a drought. This can happen to any player. We will encourage him to play his natural game.”

Mahela Jayawardene also said that Rohit Sharma is known for his big scoring ability but this year he didn’t convert his good start. Again he stated that it’s a team game and they missed something to execute their plan.

“Rohit Sharma has been brilliant at batting for long periods and getting those big scores consistently. He knows he has had starts but hasn’t been able to convert them into big scores. That’s been a disappointment. For a team to work, it’s not just one individual, it’s about a team executing the gameplan the way we’ve structured. That’s something that we’ve lacked.”