Rohit Sharma was shocked and confused about his dismissal after a controversial decision by the third umpire against the KKR. 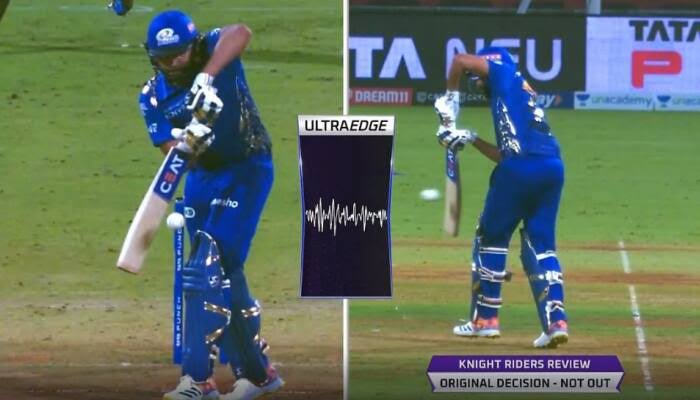 Mumbai Indians with skipper Rohit Sharma suffered a lot in this current IPL season 2022. MI has managed to win only 2 matches so far showing off an overall poor performance. The match between Mumbai Indians and Kolkata Knight Riders, held at the DY Patil Sports Academy on May 9, Monday. MI skipper Rohit Sharma won the toss and opted to bowl first. Chasing against KKR‘s score of 166 Rohit and Ishan Kishan opened with an expectation to take their team with a fiery start.

Unexpectedly, Rohit Sharma was dismissed off Tim Southee’s last ball of the first over. While Rohit tried to hit the ball towards the leg side for a single, the ball hit on the thigh pad and went back to the wicketkeeper Sheldon Jackson’s hand to take a low catch. The on-field umpire was sure with no snick and gave his decision in favor of Rohit. The wicketkeeper Jackson wanted KKR skipper Shreyas Iyer to go for a review. The initial replays showed a slight gap between the bat and the ball. Everyone including Rohit and MI fans was convinced not out.

Later came the results from Snickometer showing spikes while the ball crossed the bat and even before it. Instantly the decision came in favor of KKR from the third umpire leaving everyone bewildered. MI skipper and head coach Mahela Jayawardene were left in a shock.

Rohit Sharma‘s poor form continues as he has scored only 200 runs in 11 games in this current season affecting the whole MI team.

KKR made four major changes in their team bringing back Venkatesh Iyer, Ajinkya Rahane, Sheldon Jackson, and Pat Cummins. Venkatesh Iyer and Ajinkya Rahane opened up for KKR. Both the batsmen played aggressively from the start. They scored quick 60 runs from 6 overs. Venkatesh Iyer lost his wicket scoring 43 runs out of 24 balls with 4 sixes and 3 fours showing his strong comeback. Nitish Rana walked in playing in the aggressive form scoring 43 runs off 26 balls with 4 sixes and 3 fours. KKR scored just 29 runs losing 6 wickets in the last six overs. And managed to post a total of 165/9 in their 20 overs. Consecutive run outs finished the match as MI collapsed from 100/4 to 113 all out. KKR pacer Pat Cummins took 3 wickets.

Jasprit Bumrah, who bowled one over for five runs in his first spell comes out to bowl his second over. MI’s hope on Bumrah was repaid by taking off five wickets in the next spell. He finished with a total of 5 wickets for just 10 runs in his four overs sweeping away the main batsmen of KKR.

IPL 2022: Faf du Plessis being ‘best captain’ will lead RCB towards IPL title-winning – Michael Vaughan
” I spent 2-3 days in a towel in my hotel room” : Rovman Powell on start of IPL journey