” I spent 2-3 days in a towel in my hotel room” : Rovman Powell on start of IPL journey 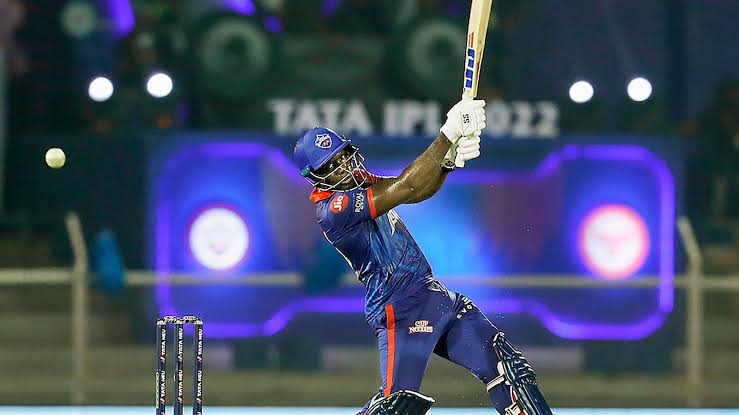 Delhi Capitals’ explosive batter Rovman Powel has shown glittering performances in the ongoing IPL 2022. In the last four games he scored 36, 33,35,67 at lower middle order. West Indian batsman requested to DC skipper Rishabh Pant for his promotion in batting order and also urged to trust on him. Against SRH he played a blistering knock of 67* and stitched an unbeaten 122 run partnership with David Warner.

His IPL journey was started with an hilarious incident. West Indian batter revealed the anecdote. During a conversation on The Grade Podcast he said “When I landed in Mumbai, I was told that the airline doesn’t have any of my bags. The only thing I had with me was my hand baggage when I left the airport. I didn’t have any extra clothes with me so I spent 2-3 days in a towel in my hotel room,”

“Rishabh Pant is someone we look up to in the Caribbean because he’s a good player. Whenever we play against him, we have meetings about how to curtail his cricketing prowess and how to keep him quiet. After I was acquired by Delhi Capitals, Pant told me that he is excited to have me as a part of the team and will give me a role that I would like. And he has stuck to his word.” Powell added

Explosive batter also shared he felt like home in DC team.”Coming all the way from the Caribbean, it was very important for me to come here and feel at home. And the Delhi Capitals have accepted me as a part of their family and I feel at home here. Being comfortable in an environment can help you put up your best performances. And I realized that everyone in the team is behind you whether you have a good day or not and that is very important,” Powell added.

Powell wanted his family to get out of poverty :

Rovman Powell revealed that he comes from a small village and farming is the main source of income. He wanted his family to get out of poverty.”I come from a small village (in Jamaica) where farming is the primary income earner for the majority of the families. But from my childhood days, I had a dream that I will take my family out of poverty through cricket and education. Cricket has been going well, thanks to the grace of God. Before I became a professional cricketer, I was going to become a soldier. If cricket didn’t work out then I would have been a soldier.”

Rovman Powell funnily described a story when he didn’t score runs in the first three matches. Powell talked with his bat and asked it “What are you doing”.“In the first three games of the IPL, I didn’t get many runs. (Moreover), I didn’t get runs with the bat that I score so many runs. I was in my room, I put them (the bat) back on the bed and I said, ‘you’re going to disappoint me in the IPL. What are you doing?’” Powell said, inducing laughter from David Warner and Prithvi Shaw, who were also a part of the conversation.”

Powell further revealed that after another low score, he changed his bat.

“I said ok, I’m playing in the next game and I’m giving you one more chance. I get one ball against RCB (in fifth game of the season – dismissed on 0), and when I went back to the room, I just put them (the bat) on the bed and I said, ‘I’m gonna give you a little break’. And I looked on the next 4-5 bats that I have and I said, ‘who’s going to put up their hands and give me some runs?’” said Powell.
“I just take one and flip the script!”