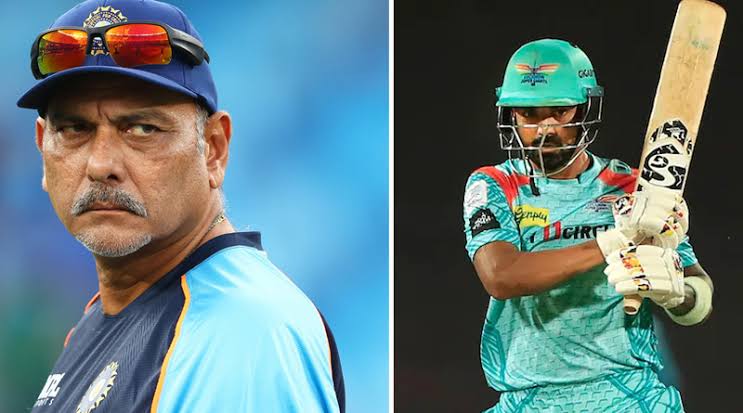 Former Team India coach Ravi Shastri has questioned LSG skipper KL Rahul’s knock against RCB on Tuesday. Meanwhile, new franchise Lucknow Super Giants ended their IPL journey after they lost to RCB in the Playoff match at Eden Gardens. The iconic stadium also witnessed one of the greatest innings by an uncapped player in the history of the cash-rich league.

In reply, LSG started very well and scored 62 runs in the six overs power play. During this field restriction KL Rahul scored 26 runs from 17 balls but after that he hit only one boundary in the next seven overs despite the required run rate was increasing. At last he was dismissed by Josh Hazelwood on 78 ( 59 balls).

However, Lucknow Super Giants didn’t chase down the total as they were short off 14 runs. LSG missed several catches during RCB’s batting. KL Rahul mentioned about it at the Post Match Presentation. Some experts also raised the question on Evin Lewis’s batting position in that match. Explosive west Indies opener came to bat at no six in that match.

“We had said that Quinton de Kock has an issue against this team. We thought he will get out to Josh but got out to Siraj. But after that at No. 3, surprise surprise comes Manan Vohra. Personally, I didn’t like that strategy at all. I was thinking, why not Evin Lewis? Why did you play Evin Lewis if you are not sending him at No. 3?” Said Aakash Chopra.

Mr 360° returns : “I would love to return, and I am looking forward to it.”
Virat Kohli stunned as Kolkata Policeman turns ‘Baahubali’ to escort fan | Watch