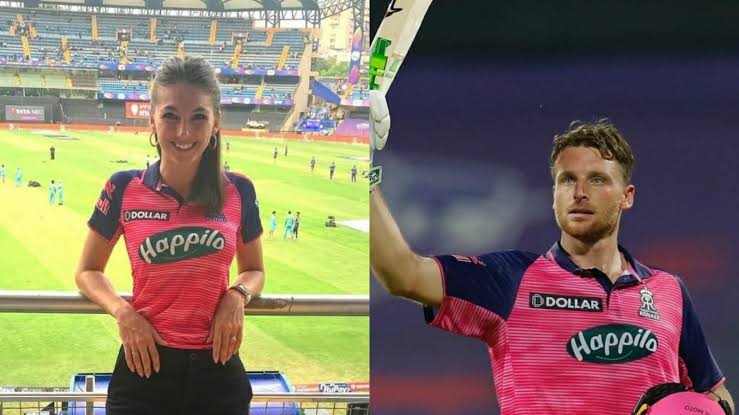 Jos Butler lit up in the Narendra Modi Stadium against Royal Challengers Bangalore yesterday night. His amazing batting performance has continued in the ongoing IPL tournament. But it created a huge problem for RR South African batter Rassie van der Dussen’s wife Lara as cameraman focused on her when Butler smashed the ball over the park. She has jokingly called RR English wicket keeper batter Jos Butler her ‘adopted’ second husband.

Ahead of RR vs RCB , Lara clarified that she is the wife of South African international. “I think I’ve now adopted Jos as my second husband it seems. I’ve been known as Louise, I think that’s what his wife’s name is, I haven’t met her before that makes it worse”, Lara said on Rajasthan Royals official podcast.

“People think I’m Jos’ wife. I definitely think it’s because I’ve been in camera quite a few times. And Dhanashree and I cannot control ourselves next to the field as we are quite invested in the cheering. And Jos has been getting 100s as we go along and maybe the excitement has got people thinking probably I’m part of him, so it’s quite interesting.” Rassie Van der Dussen’s wife added.

“And Rassie has not played as much in the IPL so I haven’t been able to show the same sentiment to him. So I’ll just adopt the cheering for Jos for now on and enjoy it,” she added.

“Please know that I’m really not Jos’ wife, I’m Rassie’s wife actually. But I’ll take it for now as she is not here, so I’ll take it and support for now,” concluded Lara van der Dussen.

Talking about RR vs RCB match, Rajasthan Royals beat Royal Challengers Bangalore by seven wickets and entered into final. Jos Butler thrashed RCB bowlers and hit his fourth hundred in this edition of IPL. He equalled Virat Kohli’s record hundred in a single edition of IPL. The most awaited IPL final will take place on Sunday at Narendra Modi Stadium.