Virat Kohli creates unwanted record in IPL 2022 ; got out most times in single digit 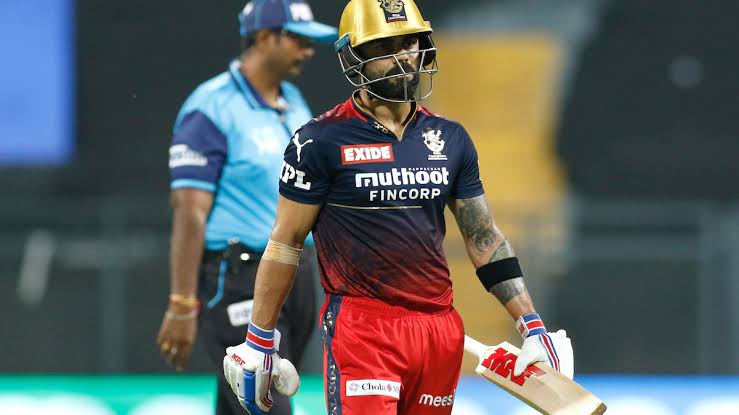 Former Indian captain Virat Kohli has failed again with the bat against RR in IPL qualifier 2 match at Narendra Modi Stadium. RCB Star batter didn’t contribute much in the previous match also. Fans are very upset to see his performance in the IPL 2022. He created an unwanted record in this edition of IPL. Kohli became a batsman to dismissed most times in the single digit of the ongoing IPL tournament.

During a match between RCB vs RR, Prasidh Krishna bowled short of length, Kohli wanted to guide the ball through the point but ball touched the outside edge and went straight to the keeper’s hand. Virat scored just 7 runs off 8 balls. He is the only player to be dismissed seven times in single digit score in IPL 2022. Fans trolled him brutally after his dismissal on social media.

Cricket commentator Sanjay Manjrekar also slammed Virat Kohli on Twitter. “Virat wanting to be on the front foot no matter what is not helping his cause. Mental toughness takes you far sure, but technical issues cannot be ignored completely. Crunch game.. front foot to a short of length bouncing ball cost him his wicket again,” he tweeted.

Speaking to cricbuzz Former Indian opener Virender Sehwag said “When you are out of form, you aim to hit every delivery you face with the middle of the bat and when it does hit, it gives you confidence. He did leave a few deliveries in the first few overs, but when you are not in form you tend to chase chose one odd deliveries or follow those deliveries. This is not the Virat Kohli we know. This is someone else. He has committed more mistakes this season than he did in his entire career,”