” I shook his hand, it was insane ” : Dewald Brevis recalls his first meeting with Sachin 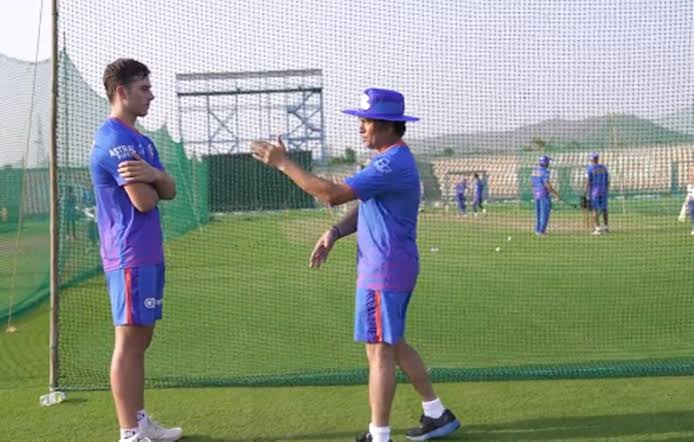 South African youngster Dewald Brevis impressed everyone in his maiden IPL season playing for the Mumbai Indians. After incredible performance in U19 World Cup he was picked by MI in the IPL mega auction. Recently Brevis revealed his first meeting with Mumbai Indians’ mentor Sachin Tendulkar.

In an interview with Cricket Fanatics, on their YouTube channel ‘Baby AB’ Dewald Brevis shared his reaction when he suddenly met Batting Maestro Sachin Tendulkar during IPL.

“I was laying on the floor of the gym and suddenly Sachin sir appeared at the door. I didn’t know what to do and the first time I shook his hand, it was insane. I have idolised him and the small technical details he taught me were special. It was great to learn from legends like him and coach Mahela,” Brevis said.

“It was very special to meet Rohit, Ishan, and the whole team when I finished quarantine. Of course, my debut was a special memory, playing in front of so many people. The louder it gets, the higher the pressure gets and I love that. The pressure to perform for MI is good because it motivates you to get another trophy for the team,” added Brevis.

Emerging South African cricketer Brevis hit four centuries in six matches in 2022 U19 world cup and won the Man Of The Series award. In IPL 2022, he showed his big hitting ability and scored 186 runs in seven matches with huge strike rate of 216.27.
He also spoke about Mumbai Indians’ youngster Tilak Varma who scored most runs for the franchise this year.

“I am missing Tilak, he is a great friend, we still keep chatting with each other. He is just a year older to me and there is so much to learn from him. Tilak is a prankster and I am already planning how to get back at him next year. I have taught him some Afrikaans and he taught me a bit of Hindi, I would really like to speak in Hindi too,” Brevis recalled.