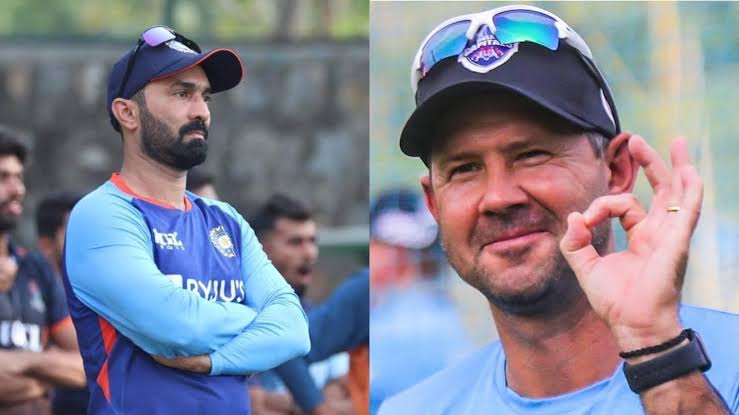 India wicketkeeper batter Dinesh Karthik made comeback to international cricket after almost three years. His incredible performance for RCB in IPL 2022 impressed everyone. Chetan Sharma led selection committee picked him for five match T20I series against South Africa. But whether he will be part of T20 world cup team or not, Ricky Ponting has given verdict on it.

“I would have him, and I’d have him in at that five or six role. The way that he finished games for RCB this year, he took his game to another level,” said Ricky Ponting while speaking to Isa Guha on The ICC Review show.

The 37 year old played some blistering cameo in the IPL at 6 or 7. His finishing touch helped RCB to qualify for the playoffs.

“When you look at the IPL, you want your better players to maybe be able to win two or three, maybe four games through the season. If you can get that out of them, it’s probably going to be a really good return. But Dinesh probably had a bigger impact on a lot of the games than most of the other RCB players did this year” he added.

“Virat (Kohli) having the year he’s had, Maxi (Glenn Maxwell) started the tournament really well … but DK was the one. And Faf too I guess, who kept the RCB bandwagon rolling. I’d be surprised if he’s not in there (India) line-up somewhere,” he asserted.

Meanwhile, Dinesh Karthik got chance to play only three balls in the first T20I vs South Africa on Thursday. It’s huge opportunity for Dinesh Karthik to show his ability as a finisher and secure his place for upcoming T20 World Cup.

That’s why he was picked at big price in IPL auction: Gautam Gambhir hailed Indian star
“This bowler has a lot of talent” Gambhir highly praise Indian youngster