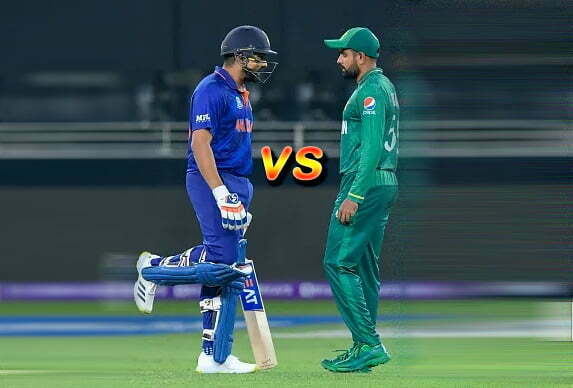 India and Pakistan will reignite their cricketing rivalry after a nine-month gap when the two arch-rivals meet each other in the Asia Cup 2022 on August 28. A blockbuster tie can also happen between the two sides in the Super 4 stage of the tournament.

The last meeting between the two teams was during the T20I World Cup 2021 when Pakistan registered 10-wicket victory chasing a target of 151.

The Asia Cup will feature two groups. The first group will see India, Pakistan and a qualifying team squaring off against each other while, the second group has Sri Lanka, Bangladesh and Afghanistan.
Pakistan placed third in the ICC T20I rankings, behind the top-ranked Indian team.

The likelihood of the two teams making it to the final from the Super 4s after the group stage is very high.
India and Pakistan have faced off against each other 14 times in the Asia Cup, with India coming out on top eight times, Pakistan coming out on top five times, and one game ending in a tie.

There is nothing that can equal to the tremendous rivalry between India and Pakistan. And also the games are watched throughout the world. From Groups A and B, two teams each will advance to the Super 4. The top two teams in the Super 4 phase are anticipated to face off again on September 4 unless the other qualifying teams surprise everyone with their performance. India and Pakistan have a chance to win because there are no knockout games. And also only the top two teams from the Super 4s will proceed to the championship game.

September 11 is the date of the conclusion. It will be the first time the two teams have faced each other in the Asia Cup final if the two teams are successful in reaching the finals of this edition. Bangladesh, Afghanistan, and Sri Lanka have proven in recent tournaments that they are not to be taken lightly. India has won the Asia Cup the most times (seven) and followed by Sri Lanka with five victories and Pakistan with two.

The first Asia Cup was held in the United Arab Emirates in 1984.With India and Sri Lanka playing each other in the championship match. Therefore, the Men in Blue won the inaugural Asia Cup.

VVS Laxman is renamed as the head coach for Asia Cup

How excited are you to watch the India v Pakistan Asia Cup match? comment below