Watch : Sai Sudharshan is dismissed in an unfortunate manner 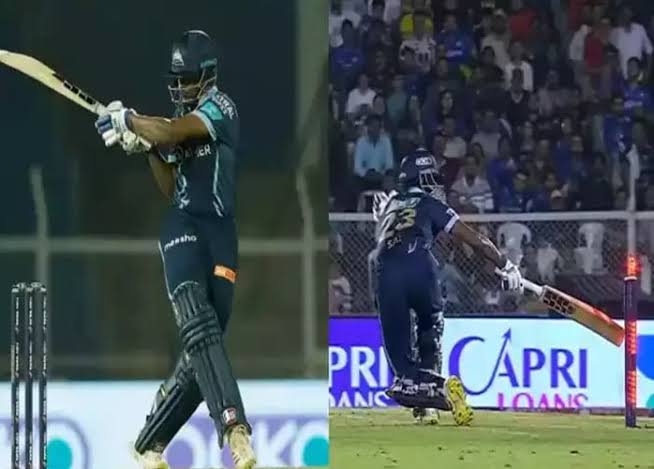 Brabourne stadium witnessed a heartbreaking match between Mumbai Indians and Gujarat Titans yesterday night. Daniel Sams heroic last over finish helped five times IPL champion team to win the match. GT were in good position and could have easily won the game. But all of these were overshadowed as GT batter Sai Sudharshan got dismissed in a bizzare fashion.

The incident happened in the 16th over when table topper Gujarat Titans needed 40 runs from 25 balls. MI all-rounder Kireon Pollard bowled a slower bouncer and Sudharshan wanted to hit pull shot but he completely missed it. He lost his control and his bat hit the Stumps. He scored 14 from 11 balls before he was out hit wicket.

Talking about the match, Hardik Pandya led Gujarat Titans won the toss and elected to field first. Mumbai Indians openers started very well as they both scored over 40 runs. But MI didn’t capitalise their good start as Suryakumar Yadhav and Kireon Pollard failed to perform. With Tim David’s finishing touch of 44 from 21 ball, MI reached the total of 177 runs. GT spinner Rashid Khan took 2 wickets and gave 24 runs of his 4 overs quota.

In reply, GT started very well as their both openers Shubman Gill and Wriddhiman Saha stiched a solid century partnership. Then Hardik Pandya guided the team to chase the total and scored 24 off 14 balls. In the last over, MI bowler Daniel Sams defended 8 runs in dramatic way.

Here is the list of battes to be dismissed via Hit Wicket :

IPL 2022 – MI vs GT: “9 Runs off 6 Balls made me feel I have nothing to lose” – Daniel Sams | Watch
IPL 2022 | Rovman Powell was disappointed on Rishabh Pant for not pushing him up the order