GT was short of nine runs to win while pacer, Daniel Sams bowled the last over and gave away only three runs making GT lose the match. 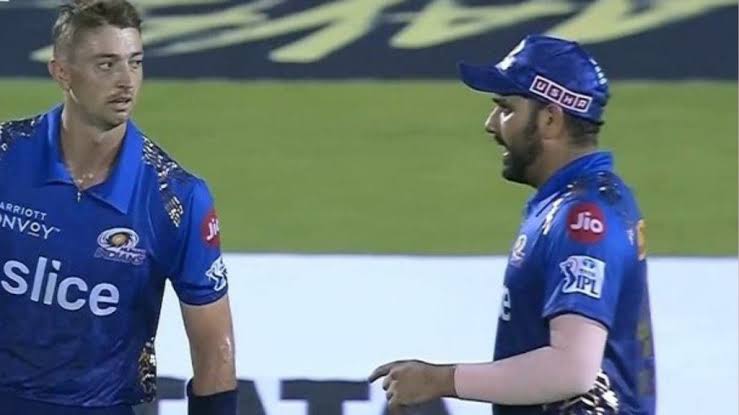 Mumbai Indians won over Gujarat Titans in the 52nd match of Indian Premier League 2022 played at Mumbai’s Brabourne Stadium on May 6 Friday. In the last over GT was short of nine runs to win. MI pacer, Daniel Sams bowled last over and gave away only three runs making GT lose the match.

In the last over, powerful hitters of GT’s David Miller and Rahul Tewatia were on the crease. Daniel Sams bowled variations of slower, fuller balls and wide length balls and restricted the GT batters to score runs. Sams played an important role in the MI’s first win with the bat and now bought a second win with them all.

Daniel Sams after his smart last over:

“It is awesome that we got over the line, it went back and forward. Must have been great for the fans to watch. 9 off 6 made me feel I have nothing to lose and the odds are in the batter’s favour.” Sams told Star Sports.

The MI pacer further added, “I got a few wide balls in the tramline and managed to execute it well. My intent was to stick to the best balls I could bowl, the slower one is the ball I go back to and it paid off.”

Mumbai was already out of the playoffs race and Sams said his side did not have the start they wanted in this IPL.

“After the eight losses, we looked at it as a mini-IPL with six games. We are trying to show what we can do and were able to pull it off which helps our confidence,” said Sams.

MI captain Rohit Sharma is delighted with his bowler’s effort in bringing back the game to their side.

“It was tight towards the back end, very satisfying as we were looking for this. Luck had to turn in to our favour; we will take this with both hands”. “We were 15-20 short (while batting), they bowled well. Tim David played really well. Dew came in, good pitch and lightning outfield meant things were in their favour, credit to our bowlers who finished the job” said Rohit.

“The boys pulled it off, which is great. We wanted to take one game at a time, we know we have not played our best cricket, but that happens. Lots of factors need to be considered on bowling changes, I felt they like pace coming on to the bat, so we wanted to take that off” said Rohit.

Rohit said, “He was under the pump in a couple of games, but I have seen him for Australia and in the BBL, he has a lot of skill. It was not easy to defend nine runs.”

After winning the toss GT opted for MI to bat first. MI openers Rohit Sharma and Ishan Kishan gave a good start with a partnership of 74 runs. Skipper Rohit Sharma scored 43 runs off 28 balls with two sixes and 5 boundaries while Ishan Kishan scored 45 off 29 balls. With the help of a good batting show by Tim David in the end overs by scoring 44 runs with 4 sixes and 2 boundaries with a strike rate over 200. MI ended with a decent score of 177/6 in the allotted 20 overs.

In reply, the table-toppers GT started their chase with openers Wriddhiman Saha and Suman Gill. Both the batsman played aggressively from the start with a century opening partnership scoring half-century each. Both the players were back in the pavilion in the same over of Murugan Ashwin’s bowling. GT’s middle-order batsman failed to continue the rhythm made by their openers. With a fantastic last over by Daniel Sams, they just managed to score 172/5 in 20 over losing against MI by 5 runs.

Hardik after the match:

Titans captain Hardik Pandya after the match said, “On any day, we’d take nine runs off the last over. The two run-outs cost us the game. I think batters let us down”.

“In T20s, you can’t lose back to back games. No blame games as we have cleared such games. We have made rookie mistakes which cost us this one”.

“We played good cricket for 19.2 overs in our innings; one or two hits would have made a difference. We should not have let it come down to the last over” Hardik concluded.

MI are out of the playoff race and still showed their performance after many matches in IPL 2022. GT lost this mat and still holds the first position in the points table with 16 points.

IPL 2022: “It’s my wish but I know it’s never going to happen” – Hardik Pandya wants this MI player in his team
Watch : Ben Stokes smashed 34 runs in an over and hit 64 ball century in country championship