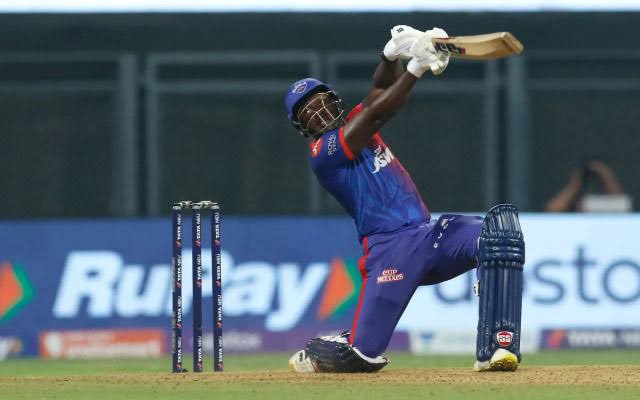 Delhi Capitals explosive batter Rovman Powel played a breathtaking knock against SRH on 5th May at Brabourne stadium. Opener David Warner won Hero Of The Match award for his brilliant unbeaten 92 but the match was changed by a destructive innings from Powel. He smoked away SRH bowlers to all parts of the ground and scored 67 from 35 balls. In the 20th over of DC’s innings, West Indian batter blown away Umran Malik for 3 sixes and a four.

Delhi batter expressed his disappointment for the lower batting order. Meanwhile, he batted at 5th, 6th and even 8th position in the IPL. He got chance to bat after Axar Patel and Shardul Thakur. He urged DC captain Rishabh Pant to trust him at no 5. Powell also mentioned that it was tough for him at the beginning of the IPL. He kept belief on himself.

“Over the last year or so my ability to [bat against] spin has increased, I’m batting [against] spin a lot better and I can bat [against] pace already,” Powell told host broadcaster Star Sports after his innings. “I just told him [Pant] to trust me at No. 5, give me a chance to start, to bat the first 15-20 balls, that’s how I want to bat, and then [after] 20 balls I’ll try to maximise.”

“I came to the IPL knowing that I’m in good form, knowing that I’ve done a lot of work. At the start of the IPL, it was a little bit tough for me,” Powell said. “I just keep believing in myself. I had a conversation with Rishabh, explaining to him that I was a little bit disappointed to bat at No. 8 in that game. But it is the nature of the game, whatever the situation you have been placed in, you have to do your best. Rishabh and the coach [Ricky Ponting], they came up with a conclusion and plan and let me bat a little bit earlier now.”

DC skipper Rishabh Pant told star sports of his chat with Powell “I don’t mind having one or two conversations here and there. In the start, he was not getting enough runs but we knew what he can give us, so we backed him and now he’s coming out with flying colours.”

Powell also said about Warner’s century. At the start of 20th over DC opener was 8 runs away from his first century in this season. Rovman Powel was on strike in the penultimate over. He asked Warner if he wanted to try his hundred and he could go for a single. But Aussie batsman denied it and told him on allout attack.

“At the start of the over, I asked, ‘do you want a single to try and get a hundred?’ He said, ‘Listen, that is not how the cricket is played. You should try to smack as far as you can,’ and I did that,” Powell revealed.

Watch : Sai Sudharshan is dismissed in an unfortunate manner
“Kieron Pollard in IPL 2022 is coming to end?” – Aakash Chopra on West Indian’s form in the current season after the match against GT