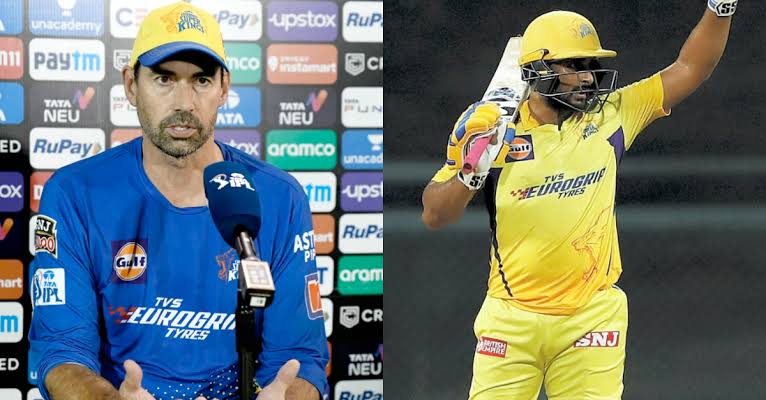 There is something not right at CSK camp. At first Ravindra Jadeja stepped down from captaincy then he got ruled out of IPL due to rib injury. Now another incident is coming from CSK camp. Senior player Ambati Raydu suddenly announced his retirement on Twitter ahead of match against Gujarat Titans on Saturday. But surprisingly he deleted the tweet later. Stephen Fleming had reacted on CSK veteran Ambati Rayudu’s retirement fiasco.

“I am happy to announce that this will be my last ipl. I have had a wonderful time playing it and being a part of 2 great teams for 13 years. Would love to sincerely thank Mumbai Indians and Csk for the wonderful journey,” wrote Rayudu in a now-deleted tweet.
Reacting on this issue CSK CEO Kasi Viswanathan said “No no he’s not retiring. Maybe he wasn’t happy with his performances and might have put it out. Just a psychological thing, I reckon. He’ll be with us,” Viswanathan told NDTV.

However, Ambati Raydu didn’t play against against Gujarat Titans on Sunday afternoon as he was replaced by N Jagadeesan. While, Raydu is yet to break his silence but CSK coach Stephen Fleming opened up on the entire episode. He called it “ a non story” and nothing has changed in CSK camp.

“It was not disappointing, it was probably a little bit of a storm in a teacup, to be honest. But, I think he was fine. It has not changed anything in the camp but it is a non-story,” Fleming said during a virtual post match conference.

I will break Virat’s record, If I get chance to open – Indian Star makes big statement | Watch
IPL 2022 playoffs Qualification: 3 spots for grabs 7 teams in the race