Rishi Dhawan grabbed everyone’s attention for wearing the face mask while bowling against CSK after his long return to IPL. 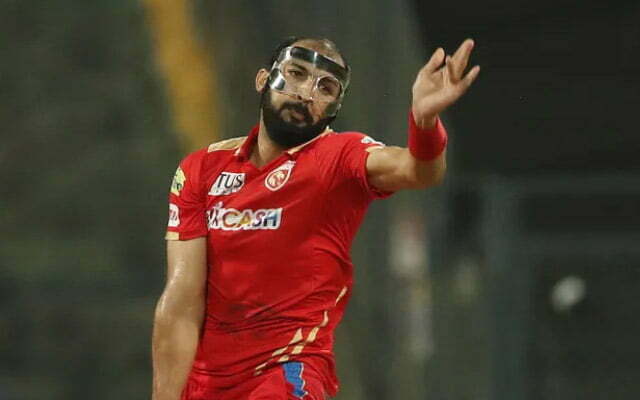 On April 25, during the match between Punjab Kings and Chennai Super Kings, Rishi Dhawan grabbed a lot of attention with a protective shield or face mask before he started bowling.

Rishi Dhawan took the wicket of an amazing batter, Shivam Dube, in his second over. And CSK were reduced to 40/3 in 7 overs while chasing a target of 188-run. In the last over MS Dhoni came in and was about to smash the required 27 runs. But Rishi Dhawan did well as PBKS restricted CSK to 176/6 losing the game.

Rishi Dhawan played his first game of the IPL in 2022. He missed the first four games in IPL 2022 due to a nose injury. During the IPL 2022 mega auction, he was taken by Punjab Kings for INR 55 Lakhs. Rishi last played an IPL match in 2016 for Punjab Kings and returned to the same franchise after 5 seasons. He showed his impressive performance as a captain. And he led Himachal Pradesh to a historic win at the Vijay Hazare Trophy last year.

Rishi Dhawan grabbed everyone’s attention for wearing the face mask and many conversations on social media revolved around his mask. As many people have not seen a player wearing a mask of this kind.

Punjab Kings had shared a video on social media in which Dhawan can be seen practicing with the gear. Also, he talked about getting the chance to participate in the T20 league and how he lost his confidence after the injury.

“I am making an IPL comeback after 4 years so it was a little disheartening when I got injured in the Ranji Trophy. I had to go through surgery which ruled me out of the first four matches. But I’m totally fine and available for selection now. I’ve been training hard and hope to have a strong comeback,” Dhawan said in the video.

See also  "Kieron Pollard in IPL 2022 is coming to end?" – Aakash Chopra on West Indian’s form in the current season after the match against GT

Dhawan worked hard for his come back and performed well in domestic cricket.

“It was absolutely a low phase for me because I’d worked so hard to make a comeback and I finally got a chance in the IPL after 4 years. I performed well in domestic cricket. I tried continuously for 3-4 years to make a comeback so I was a little scared wondering whether I’d miss out on playing due to my injury”.

“But this happens in cricket. Sometimes we’re happy and other times we’re sad. My experience has helped me realize that there will be ups and downs,” Dhawan further added.