Gautam Gambhir gave a serious speech to the team in the dressing room to motivate and guide them for the Playoff, after LSG lost against GT 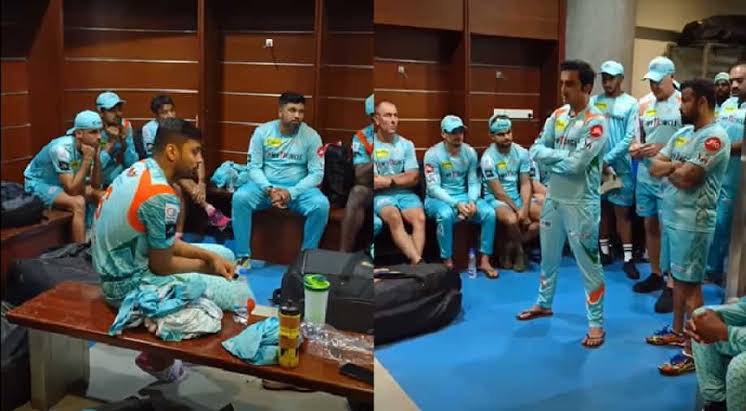 Lucknow Super Giants lost against Gujarat Titans two times in this current IPL season. Gujarat Titans caught the first position in the points table after defeating LSG by 62 runs in match no. 57 on 10 May in IPL 2022. GT won the match with controlled bowling and LSG collapsed with a score of 82 runs in 13.5 overs showing a poor batting performance while chasing a target of 145 runs. Then LSG went down to the second position with 8 winning matches out of 12. LSG’s mentor and former Indian cricketer Gautam Gambhir gave a serious speech to the team in the dressing room to motivate and guide the team to the IPL 2022 Playoffs.

Gautam Gambhir has already helped KKR in winning Two IPL trophies. In the video, Gambhir said that there is nothing wrong in losing in a match but ‘there is a lot wrong in giving up. He also mentioned that his team was weak in the last match played.

“See there is nothing wrong in losing. It’s absolutely fine. One team has to win, one team has to lose. But there is a lot wrong with giving up. Today I thought that we gave up. We were weak, and honestly, there is no place for being weak in a tournament like IPL or in sports. That is where the problem is. We have beaten teams in this competition and have played really good cricket. But today I thought that we probably lacked that game sense which is more important,” said Gambhir

“We knew that they bowled well and we expect them to bowl well. It’s a world-class competition; you’re playing against international bowlers. And we want people to challenge us no doubt about it. That is what we play the sport for. We practice day in and day out because we want to be challenged” said Gambhir.

Talking about the match, GT won the toss and opted to bat first. Opener Wriddhimam Saha was back in the pavilion for just 5 runs. Following him, wicketkeeper batsman Matthew Wade and skipper Hardik Pandya were dismissed quickly for 10 and 11 runs respectively. The other opener Shubam Gill played a good knock for 63 runs in 49 balls with 7 fours and was not out till the end. With the help of small runs from David Miller and Rahul Tewatia GI managed to put up with a total of 144/4.

Virat and Rohit adviced me not to think about high price tag : Ishan Kishan
Suryakumar Yadhav likely to miss T20 series vs SA after being ruled out of IPL 2022 : Reports