IPl 2022 | DC vs RR: Ricky Pointing recalls – “I think I broke three or four remote controls and a few bottles of water“

Ricky Ponting was in quarantine during DC vs RR and recalled how he smashed few TV remotes in frustration during the last over of the match. 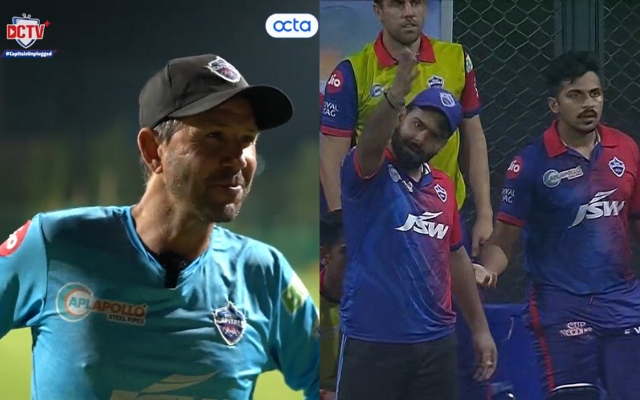 Delhi Capitals and Rajasthan Royals faced each other at the Wankhede Stadium in the 34th match of the IPL on Friday (April 22).  DC skipper Rishab Pant got furious in the final over with the umpire’s decision not to award a no-ball. He also sent Coach Pravin Amre to protest against this decision. Delhi Capitals head coach Ricky Ponting recalled the match of DC vs RR on television while he was in quarantine.

Rajasthan Royals won the game by 15 runs, in the end, the game concluded with the controversy in the final over with the on-field umpires. DC struggled throughout the match chasing 223 to win. Obed McCoy came to bowl the last over. Powell hit two back-to-back sixes and rose in confidence. In the third delivery, it was a full toss and Powell smashed it for another long six. That made it 3 consecutive sixes in 3 balls. After then the controversy was raised when McCoy bowls a waist-high full toss and DC needs it to be checked as it is a no-ball. While on-field umpires made the decision without asking the third umpire to check if it was a no-ball. By then Delhi Capitals went really furious.

When the decision stayed, Pant signaled his batters to come back from the ground. Also, Pant sent DC coaching staff Pravin Amre on the field to argue with the umpire’s decision. The match resumed but the batter could not perform with the remaining 3 balls. DC fell short by 15 runs and DC lost against RR.

Ricky Ponting – frustration during his quarantine:

DC head coach Ricky Ponting was in quarantine during DC vs RR match after one of his family members had tested positive for COVID-19. Ponting was watching the game from the hotel and recalled how he smashed a few TV remotes and water bottles in frustration during the last over of the match.

“It was frustrating. I think I broke three or four remote controls and a few bottles of water might have got thrown into the walls and things like that (laughs). When you’re on the sidelines, being a coach and you can’t control what’s happening out in the middle, that’s hard enough, but when you’re not actually on the ground, it can get a little more frustrating. I am sending text messages every over, do this do that, things like that,” said  Ricky Ponting.

Delhi Capitals have so far managed only three wins in their first seven matches this season as they struggled with both the bat and the ball. Ponting is confident of his team’s chances in the ongoing season. Ponting asked his players to try hard for better results and move forward in the points table.

“I know we’re so close to turning it all around. We’ve all got to trust, we’ve got to believe, we’ve got to stay upbeat and positive. And if we are, things will definitely change for us.

“The harder we try from here, the harder it’s going to get. We’re just going to stay nice and relax and keep repeating things we’ve been doing. And then results will definitely come our way. We are too good a team for the results not to change,” Ponting said.