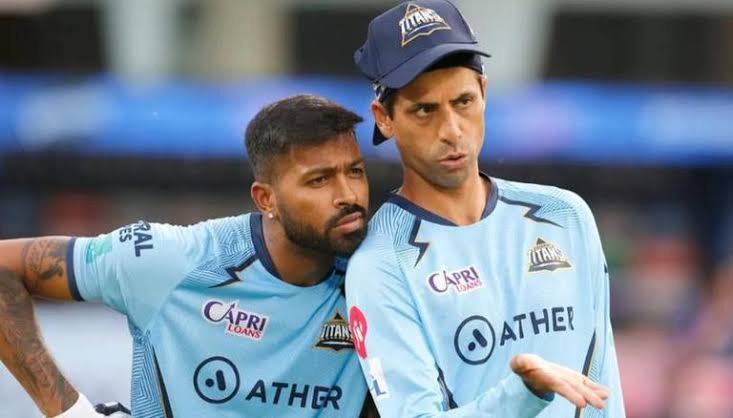 Gujarat Titans won a electrifying match against SRH on Wednesday night. Chasing 197 run to win, Titans needed 22 runs from last over but Rashid Khan and Rahul Tewatiya’s magnificent performance grabbed two points for the team. Tewatiya smashed a six on the very first delivery of SRH pacer Marco Janeson where as Rashid Khan hit three sixes in the penultimate over of the match and secured a thrilling victory over SRH.Hardik Pandya opened up in a chat with Ashish Nehra.

When Titans needed 3 runs from last ball and 2 for tie, captain Hardik Pandya was almost ready for a super over but Nehra asked him to hold on. Pandya revealed this in a conversation with Rahul Tewatiya and Rashid Khan on IPL’s officiall website.

“I have started to be very neutral while watching the match. Neither I am very happy nor very sad. I have to look at everything because my behavior will an effect on the dugout as well. But in all games, I and Ashu pa (Ashish Nehra) feel ‘this game is getting tighter’. I was getting ready for Super Over but Ashu bhai said, ‘Hey, hold on! We are finishing this here only’. You (to Tewatia) sent the thigh pad back and I thought, these guys are going for Super Over!” GT captain Pandya said in the video

Tewatiya also explained why he was sending back his Thai pad before the last ball was bowled.

“I thought, if the bowler bowls a yorker, Rashid bhai will play the shot that he usually plays through the middle of his legs towards square boundary. I thought that if it is not a six, I have to run no matter what. But Rashid bhai did it,” Tewatia explained.